The Culture Of This Franchise System Must Change—Chapter 3

In the last two issues of Avanti, I have exhorted SEI to pay attention to the culture of its franchise system as the single largest roadblock to meeting the internal and external challenges that it and each one of its franchisees face.

In the most recent issue of Avanti, I urged each of you and SEI to carefully review an article in the October 2016 issue of the Harvard Business Review written by Cheryl Bachelder, the CEO of Popeyes Louisiana Chicken. The title of her article is “The CEO of Popeyes on Treating Franchisees as the Most Important Customers.” I explained how her philosophy of collaboration and transparency has led to a 33 percent increase in the number of franchised restaurants, and a nearly 400 percent increase in the price of its publicly held shares during her tenure.

With the approval of in-house counsel for Popeyes, with whom I have an excellent and collegial working relationship, I want to share with you some of the specifics of how Cheryl Bachelder’s philosophy is implemented in the day-to-day relationship between the company and the Popeyes International Franchisee Association (PIFA), its independent franchisee group, which I have been privileged to represent since 2010.

When the system-wide contracts with beverage manufacturers and distributors were up for renewal, as counsel for PIFA, I was given prompt access to the requests for proposal that were sent to all of the major beverage companies in the United States. I was also provided with a copy of the analysis of those RFPs that was prepared by an independent consulting company retained by the franchisor for the purpose of soliciting and analyzing proposals from those beverage companies. When the proposals were received, I was also privy to the analysis leading to the decision of which beverage suppliers to choose. Finally, I was invited to assist the general counsel of the franchisor in the negotiation of the beverage contracts that resulted from that process. I was a participant in each and every redlined draft of these contracts until they were finalized.

This process gave the franchisee community absolute assurance that they were getting the lowest possible cost of goods, that the other benefits associated with the contract were as favorable as could be achieved, and most importantly, franchised locations were receiving the same prices and benefits as company-owned locations and the franchisor was not receiving any money from the manufacturers. Rather than treating their supply chain relationships and contracts as equivalent to the nuclear launch codes, this franchisor realized that the best way to enhance the relationship with its franchisees and assure them that they were paying no more than fair market value—and that the franchisor had nothing to hide—was to invite them inside the tent.

As counsel to PIFA, I have an open invitation from the franchisor to attend each of its annual conventions and to attend any meeting or session I choose. I have attended several of these conventions, taking advantage of this opportunity to have open and constructive meetings with various members of the legal department, including the general counsel of the franchisor. This open dialogue assists us in resolving issues as they arise.

Popeyes has written policies regarding transfers, encroachment and relocation of franchised units. These policies provide specific guidance to franchisees on the steps necessary to seek and obtain approval for a transfer or relocation. In addition, when any franchisee believes that another proposed location is sufficiently close to their existing location that it may have a material impact on sales, there is an impact policy process by which that matter can be brought to the attention of the franchisor and independently analyzed. Over the years, any time that the franchisor has proposed a change to any one of these policies, the proposal has been submitted to me for my review and comment. This has resulted in material changes to the policies for the benefit of franchisees.

Finally, when the revised Franchise Agreement has been drafted, it is provided to me for my review and comment prior to finalization. While this process is far from perfect, and there is no question that PIFA does not achieve all of its goals in this process, it is certainly preferable to the secret development of the 2019 7-Eleven franchise agreement and the inevitable “take it or leave it” approach that will likely follow its rollout.

What has the culture of Popeyes created? Aside from the enviable increases in franchised locations and the stock price noted above, the financial statements of the company, when examined side-by-side with those of SEI, show that the financial performance of Popeyes is vastly superior, as explained by the chart below. 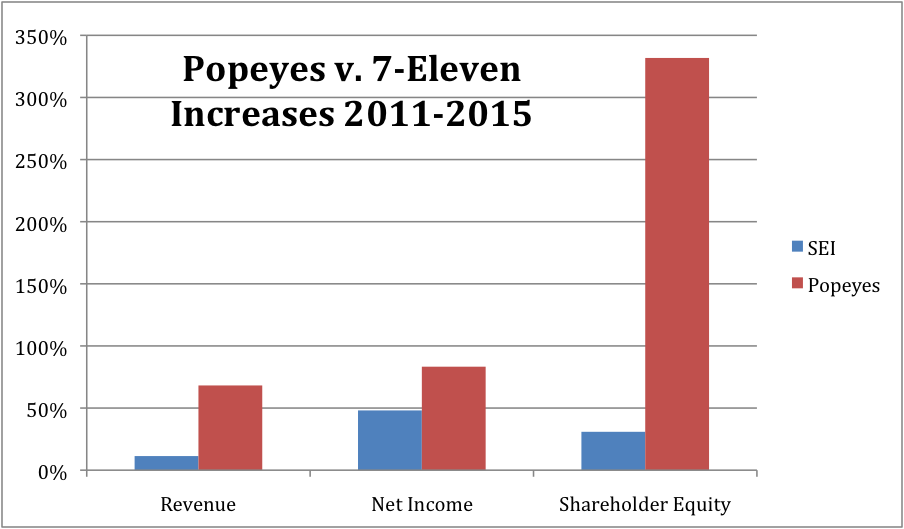 Consider the fact that SEI’s corporate owners are looking to U.S. operations as a central element of the turnaround plan to shore up its earnings and its stock price. I urged them in the strongest possible terms to take a look at the Popeyes story as the path forward. In the end, the Bachelder servant leadership philosophy is not just a good idea, is not just morally correct and ethically proper, it’s also just plain good business.