All In On Gasoline Chapter 3: Buyer Beware

In Chapter 2, I explored the implications of the $21 billion acquisition of Marathon Petroleum Corporation’s Speedway business. Among the issues we observed was that the interests and concerns of franchisees in regard to this transaction were invisible, not only to the parent company of your franchisor but to Wall Street, as well. In addition, the built-in conflict of interest, where franchisees are paid a commission based on the number of gallons pumped but SEI has the right to set the retail price, continues to be exploited by SEI. SEI’s interest is clearly in maximizing its profit at the pump, which decreases the gasoline commissions to franchisees and also decreases the number of customer visits, and thus retail merchandise sales.

The financial consequences of two blockbuster gasoline purchases by SEI’s parent signal an existential change in the strategic thinking of the company, which has deep implications for franchisee stakeholders. This is especially so because both the Sunoco and the Speedway acquired stores are much more dependent on gasoline sales than the typical 7-Eleven store. The extent to which 7-Eleven has become a gasoline business is further demonstrated by the fact that following the closing of the Speedway transaction, approximately 57 percent of the locations in the United States will have gasoline, but only 50 percent of the locations will be franchised. Consequently, SEI has made clear its intent to progressively convert these acquired stores to franchised locations. And as franchisees contemplate whether or not to make such an investment, they should be mindful of the ways in which SEI is exploiting its control over pricing at the pump.

As if the news of the Speedway acquisition was not meaningful enough, the most recent disclosures by SEI’s parent company, which demonstrate how it is coping with the COVID-19 impact on the business, should push franchisee concerns to as yet unheard of heights.

But that did not tell the whole story, with franchisees facing persistent staffing issues, supply chain disruptions and deepening dissatisfaction with assistance from SEI.

SEI found itself with a serious challenge based upon the impact of the pandemic on merchandise sales and gasoline sales. For the six months ended June 30, 2020, merchandise sales were down nearly 16 percent year-over-year, but gasoline sales were down by more than 30 percent. SEI’s revenues from operations for the same period of time were down 23 percent. But for the same six-month period, SEI posted operating income of $486.9 million, a 6.1 percent increase. Short of magic, how did SEI pull this off? 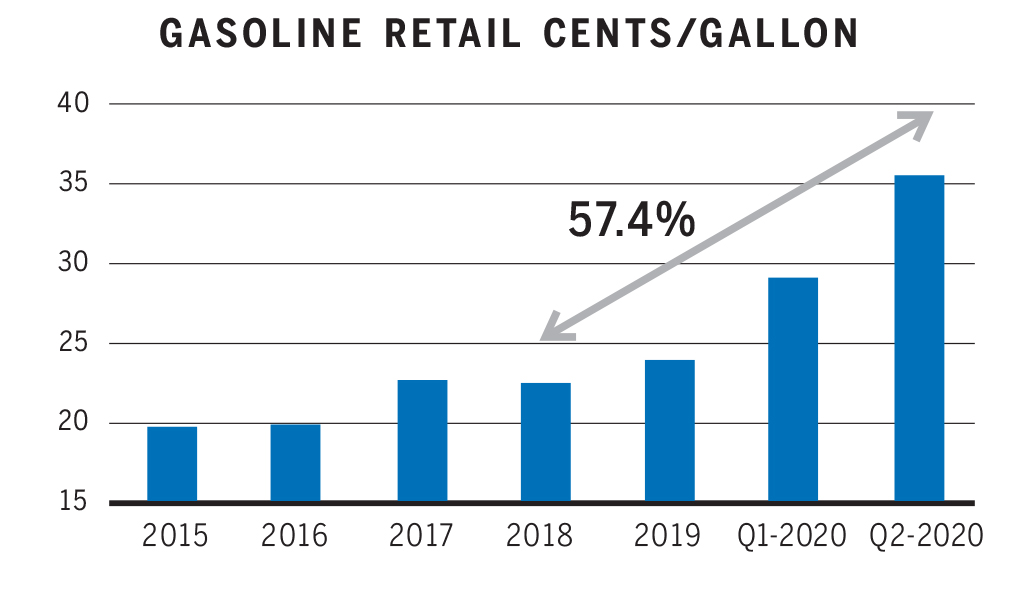 The result is equivalent to pulling a rabbit out of a hat. For the six months ended June 30, 2020, while the average price declined slightly, gasoline sales were down, and gallons pumped were down, all to the detriment of franchisees, but once again SEI extracted enormous profits from its gasoline business.

This profit grab should not be viewed in isolation, but rather in the context of three other metrics which are essential to franchisee interests and should be carefully weighed by franchisees considering investing in one of the almost 4,000 gasoline stores SEI acquired from Sunoco and Speedway.

The second concern is recent developments are changing the expectations of some analysts about when electric cars may come to dominate the market and thus depress the demand for gasoline. A New York Times article was published on September 20, 2020 entitled “The Age of Electric Cars Is Dawning Ahead of Schedule.” The authors state, “Battery prices are dropping faster than expected. Analysts are moving up projections of when electric vehicles won’t need government incentives to be cheaper than a gasoline model.”

According to this article, technology has advanced to the point of allowing higher density and thus longer life batteries at substantially lower cost. Market penetration for electric vehicles in Europe is much higher than in the U.S. at present because of the subsidies available in Europe but not in the U.S. Those subsidies will become less and less important when the all-in cost of electric vehicles reaches equivalency. In fact, in the U.S., a BMW 3 Series powered by gasoline now costs approximately the same amount as a Tesla Model 3. And what is the plan of traditional gas powered vehicle manufacturers? It is to “avoid oblivion” by using “…their expertise in supply chains and mass production to turn out economic electrical cars by the millions.” Sunoco and Marathon Petroleum Corporation were both quite keen to reduce their exposure to the domestic retail gasoline market; one must wonder whether their motivation to do so relates to the fact that gasoline-powered cars may well eventually be consigned to the dustbin of history.

Third and finally, franchisees should be deeply troubled by the fact that SEI’s capital investment in existing stores has stagnated over the last several years. In real dollars (or yen) the amount has not changed very much since 2017; the amount spent in the six months ended August 31, 2020, was the lowest amount since that year, amounting to just 18.6 percent of total capital expenditures. For the same six months in 2019, expenditures on existing stores were 39 percent of the total. Additionally, franchise stores starving for improvements must also be seen in the context of steady, and indeed remarkable, increases in revenue and profit at the SEI corporate level, which are in no measure matched by the performance of franchised stores.

The bottom line: The franchise model has undergone massive changes in the last several years, including the far-reaching changes reflected in the so-called 2019 franchise agreement. The strategic gas acquisitions, as well as the outsized emphasis on gasoline sales and profit, should encourage franchisees considering an investment in one of these gasoline stores to do their homework, to engage professionals to assist them, and do as much due diligence as possible.