One of my favorite Saturday Night Live skits involves a scene in the Change Store, a retail outlet that makes change in currency for customers. Here is how I remember the skit: A newly hired clerk in training watches as an experienced employee changes a $10 bill into two $5 bills for one customer and a $1 bill into four quarters for another customer. After watching several transactions like this, the puzzled new clerk turns to the experienced employee and says, “This is an interesting business model, but how do you make money?” The experienced employee pauses, looks up thoughtfully, and then responds, “Volume!”

I think of this skit often when I hear SEI officials tout the benefits of fresh food and hot food. Franchisees have been bombarded with data that suggests that this category can add incremental gross revenue, and that the gross margin on fresh foods and hot foods is higher than on other inventory items. While the gross margin data appears not to take into account spoilage and write-offs, the most important omission is the lack of reliable data on the incremental labor cost associated with this category. It is my understanding that SEI claims not to have access to that information, which is especially crucial in the era of rising minimum wages. No less than 22 states raised their minimum wage as of January 1, 2017.

As every franchisee knows, SEI’s financial stake in the operation of your store is based on its share of the gross margin. For the franchisee, their financial stake in the operation of the store is based on the bottom line. SEI’s seeming indifference to the net effect of the fresh food and hot food segment is noteworthy and deeply concerning. We also strongly believe that SEI’s recent initiative to markedly increase the percentage of stores that are franchised and reduce the percentage of stores that are company-owned is an attempt to transfer the challenges of minimum wage increases and the as yet undisclosed system wide impact of fresh food and hot foods from its own stores to franchised stores. It also insulates them from the effects of overpriced gasoline and the resulting negative impact on customer traffic in the retail stores. 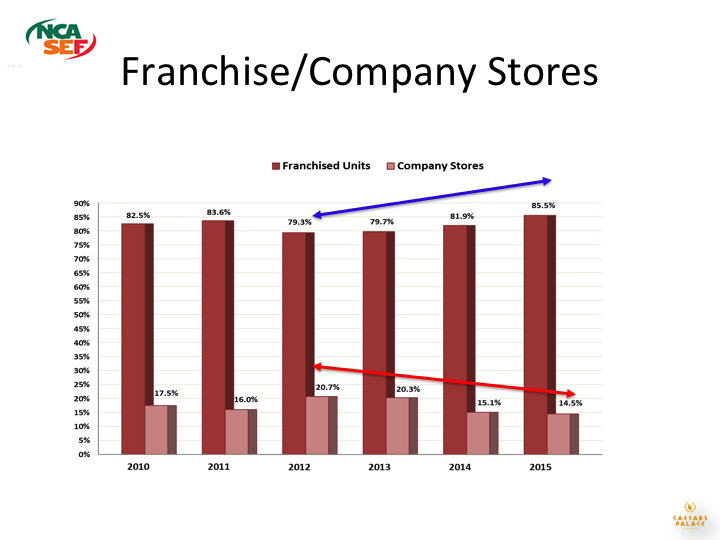 The shedding of corporate stores and the push for fresh foods and hot foods did not originate in Dallas, but in Tokyo. The parent company of your franchisor has recently faced serious financial and governance problems. Based on publicly available information, here are some highlights of their consolidated financial results for the nine months ended November 30, 2016, compared with the same period in 2015:

The only bright spot for the parent company is its convenience store segment, which experienced a 2.7 percent YOY increase in operating income through November 30, 2016. According to the company’s summary report for investors, issued January 12, 2017, this increase is the result of “higher merchandise sales led by fresh food and beverages.”

The advantages of this strategy are shown in the following chart, taken from a report to shareholders issued by the Japanese parent company comparing its first fiscal quarters over the last several years. Note the sharp increase in SEI’s operating income resulting from the increase in the number of franchised stores and the substantial ramp-up in gross profit achieved from the gasoline business. In short, your franchisor believes that as fresh foods and hot foods become a higher percentage of revenue, it can make much more money franchising a store than operating one itself. And that’s what it’s telling investors will rescue the company. 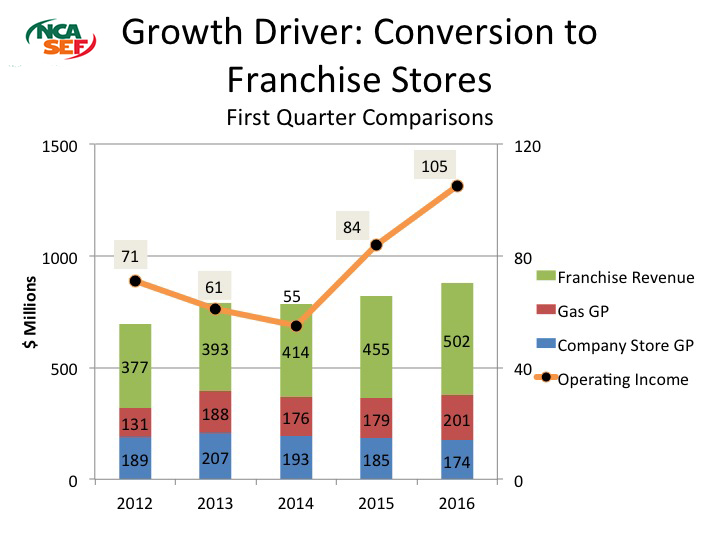 According to an article in the Dallas Morning News, SEI intends to increase the number of franchise stores in the U.S. to 10,000 by fiscal year 2019, mainly through acquisitions of smaller chains. It also plans to introduce counters featuring hot foods and more fresh food offerings, bringing to the U.S. some elements from its Japanese stores.

All of this data leads to the inevitable conclusion that the parent company’s formula for the future of the company as a whole depends in great measure on expanding the number of franchised stores in the U.S., transferring the risks of minimum wage and reduced net profit on fresh foods and hot foods from corporate stores to franchised stores, and increasing reliance on fresh foods and hot foods to enhance gross sales and gross margin for the franchisor, leaving the franchisees to deal with the fallout.

This is an existential moment for the franchisee community. The future of the franchise system in general and the value of franchisees’ goodwill in particular, now hang in the balance. The time is now for franchisees to set aside all other concerns and focus on one, and only one, issue: the form of the 2019 franchise agreement. All other issues, concerns, problems, differences and challenges pale in comparison.